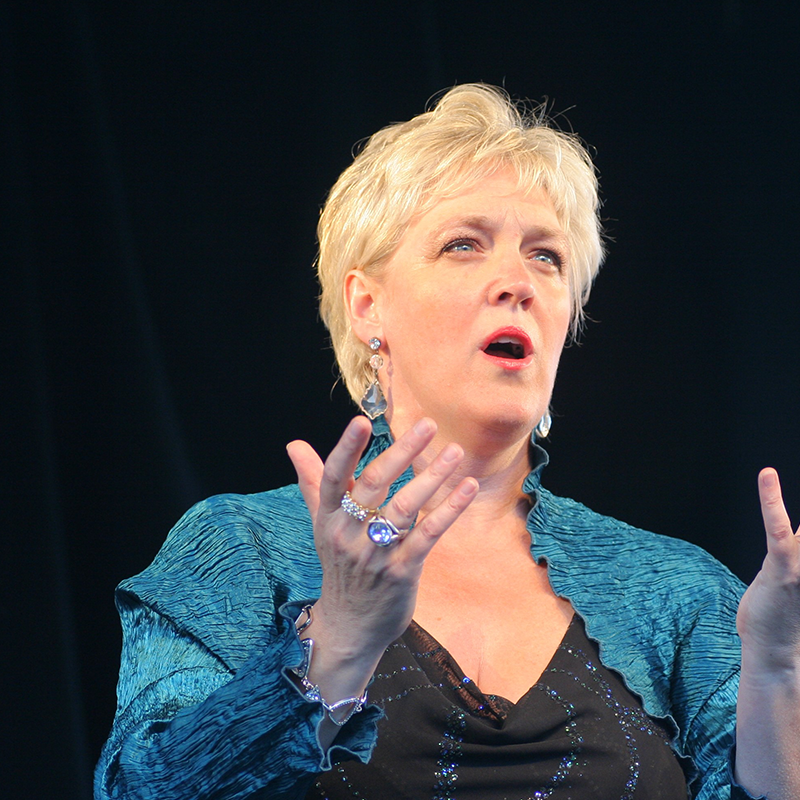 "Exceptional was Janet Shell, the guest soloist in Mahler's Songs of a Wayfarer. Hers is a rich mezzo soprano voice with a wide palette of vocal colours to draw from and she has an immediately appealing flare for dramatic representation."

"The choir were fortunate to combine with such an accomplished orchestra and with the mezzo soloist, Janet Shell, whose performance matched her distinguished pedigree. Her clear and vibrant voice effortlessly spanned an extremely wide range, extending from orthodox Latin oratorio to Arabic incantations which for a moment transformed St Martin’s into a temple in the Holy Land. "

"Janet Shell was a magnificent Angel, her fine voice rising to the heights of the cathedral vaults, in soothing smoothly-shaped phrases"

"…As was the mezzo soloist, Janet Shell. I shall long remember her delivery of "Thou hast forestalled the agony, and so for thee bitterness of death is passed”."

"Janet Shell sang with great feeling and golden tone. Her account of O Rest in the Lord was ravishing."

"Particularly moving was the stillness and radiance that Janet Shell brought to her aria Woe unto them. "

"Glamorous mezzo soprano Janet Shell, wearing a sparkling, figure hugging gown, had a beautiful voice, her Agnus Dei being one of those tearful moments. Her Traviata-like Lux Aeterna was wonderful."

"Janet Shell, called “mezzo” on the programme, sang as a warm-toned, old-style alto might. Her voice proved so expressively shaded and intimate Tidings to Zion, you yearned for its return. This finely cultured singing seemed a gift as ready and as natural as speech."

"Janet Shell gave an outstanding and highly moving account of the Agnus Dei... so soul searching and yet musically precise that one was moved to contritional tears."

Janet Shell. After originally training as a classroom teacher, Janet changed profession to study voice at Guildhall School of Music and Drama, winning several singing competitions, including prizes for French song in Paris. She was the first mezzo soprano to be taken on by YCAT; the first singer ever to sing live on Classic FM and she also gave the first female duet programme on ‘Friday Night is Music Night’ for the BBC.

In her early career, Janet performed with Kent Opera, London Opera Players, Opera d’Aix en Provence, Göttingen Festival Opera, Welsh National Opera, Opera North, English National Opera and for the Royal Opera House, Covent Garden. Recital tours in South America and France resulted in her being chosen by the British Prime Minister of the day, John Major, to sing in Tokyo to honoured guests and subsequently at Downing Street. Over the years, she has given many opera gala concerts for celebrated guests and Royalty. Janet now specialises in recital and oratorio and is particularly known as an interpreter of Elgar.

The last season included Elgar Dream of Gerontius, Jenkins Armed Man, Bach St Matthew Passion, a lecture-recital on her family ancestry, which was inspired by the discovery of the remains and subsequent burial of her Great Uncle from WW1 (the story made global headlines), Verdi Requiem, Ravel Sheherazade and Elgar Sea Pictures. This year Janet will sing Mozart Vespers, Haydn Maria Theresa Mass and Verdi Requiem and will record Durufle Requiem with Guildford Cathedral Choir in June.

Over the course of her career Janet has had some unique experiences including singing for the Spice Girls and David Walliams; giving singing lessons to the late Errol Brown of Hot Chocolate fame; recording a track with a Hip-Hop artist; singing the national anthem on ice (carefully!) before an ice hockey match and singing at the first Royal wedding at Hampton Court Palace in 500 years.

As a singing teacher and vocal coach Janet has given masterclasses in Florida, Tokyo, and New York and she is the resident vocal tutor at Chester Summer School. In the past 12 months Janet has adjudicated at Shrewsbury School and  Cheltenham Festival and given a masterclass at Marlborough College and continues her workshops to choral societies on vocal technique. She currently teaches singing at St Paul’s Girls’ School in London and Eton College, alongside a busy Private Practice. As a former teacher, she coaches classroom teachers (and other public speakers) on their voice use and vocal health through her company Talking Voice.