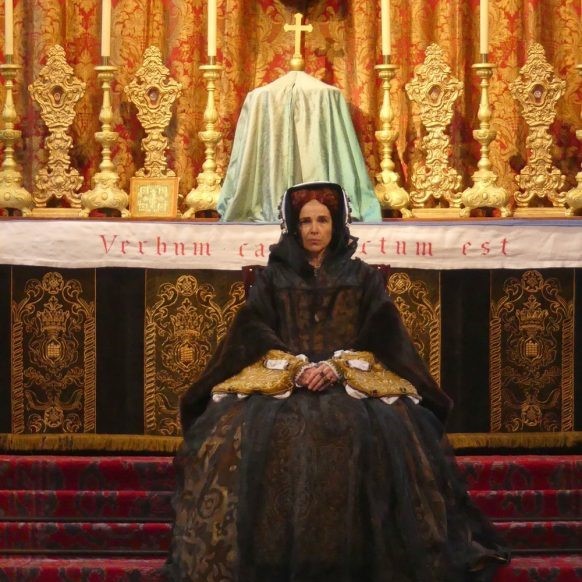 Mary's Hand-a one-woman opera exploring the life and political career of Mary Tudor. The writer Di Sherlock and composer Martin Bussey have created a clever, dramatically satisfying and eminently programmable piece which, while created for the mezzo-soprano Clare McCaldin, should prove an attractive vehicle to other singers, and certainly deserves an ongoing concert life.

Elegant, thoughtful, current without being gimmicky, and immaculately presented, Mary’s Hand is a 70-minute rebuke to the UK’s major opera companies. When you think of some of the baggy, ill-conceived and cynically presented dross they’ve given us in the name of new opera recently (and the money they’ve thrown at it), and compare it to this modest gem of a show, it’s enough to turn anyone to operatic zealotry and score-burning.

Eclipsed by her younger half-sister, Elizabeth, Mary Tudor lies ‘in the shadow hand of Time’ – confused with Mary Queen of Scots, vilified as ‘Bloody Mary’ or forgotten. Hailed at her funeral as ‘a King’s daughter’ (first child of Henry VIII) and ‘King also’ (first Queen of England to rule in her own right) the hand that Fortune dealt her was a tricky one. She lies beneath Elizabeth in Westminster Abbey, awaiting resurrection in the afterlife and in the popular imagination.

It’s a little-known fact that Mary loved games of chance. At the beginning of Mary’s Hand Mary invites the audience to help tell her story in a game of cards. The cards (Court Cards – Royals only!) represent the key players in her life. For the show to begin the audience must choose a card. The choice of that and subsequent cards determines the order in which she will sing her story and reflect upon influences and events: her father Henry VIII, her mother Catherine of Aragon, her Catholic faith, as well as the perceived causes of her troubles; her half-brother Edward, half-sister Elizabeth, the ever-stronger Protestant faith, and her desperate desire for a child.

Above all, Mary was driven by the wish to be a good monarch and her deep conviction that she needed to restore England to the Church of Rome. Her marriage to the Catholic Philip II of Spain promised to resolve many of these issues at a stroke, but Mary played her cards badly and paid a high public and personal price.

For more information on the production please contact: ann@annferrierartists.com