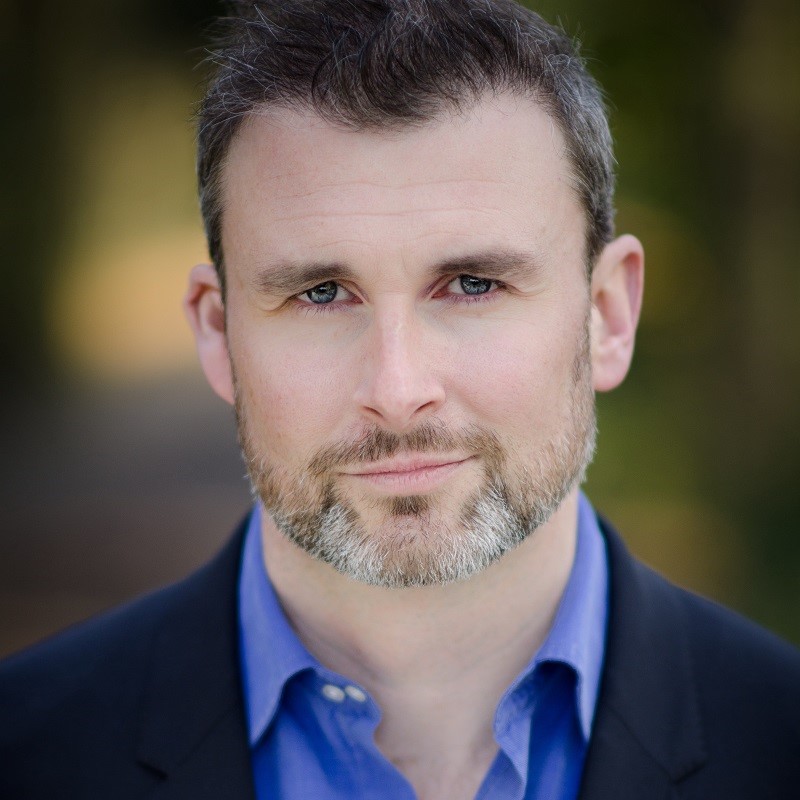 "Gusmano combines a civilised exterior with a vicious streak and an obsessive jealousy when it comes to Alizara. James Cleverton ably conveyed this, moving his first aria from platitude about peace to obession with Alzira, and turning the screw on Kate Ladner's Alzira in their Act Two duet. Cleverton has developed into a fine Verdi baritone, singing with a shapely sense of well filled line, combining power and flexibility with fearlessness when it comes to the top. Whilst Gusmano's death-bed conversion is a little difficult to make convincing, there is no doubt at all of the beauty with which Cleverton sang the aria, convincing us with sheer expressive technique. I certainly hope to hear James Cleverton in further Verdi roles."

"The outstanding performances come from Cleverton and Yun. The latter has an easy ring at the top of his voice and a restless dramatic energy. Cleverton, handsome-sounding and wonderfully subtle, really convinces both as the stiff-backed dictator of the opening scenes and the man of conscience at the close."

"James Cleverton was a splendid Gusmano, proud and lyrical in his opening “Eterna la memoria”, martial in its cabaletta and dramatically arresting throughout. The duet with Zamoro, leading to trio, quartet, sextet and the impressive chorus that brought the first act to an exciting climax was one of the highlights of the evening."

"Arac stands out for his spoof Handel song, magnificently delivered by James Cleverton."

"James Cleverton was watchable and sonorous as the theatre’s writer-in-residence Bussy."

"James Cleverton is outstanding as the insidious pimp Kyoto"

"James Cleverton is all too convincing as the odious pimp Kyoto"

"James Cleverton’s high-lying baritone never gets lost in the thick orchestration and he easily dominated the big scene in which he displays poor Iris to the Yoshiwara street. I enjoyed the careful calibration of his acting as the character initially appears an almost jolly panderer and only reveals his black-hearted brutality in stages."

​The 2018/19 season has seen James perform the role of Alberich in Das Rheingold at the Royal Opera House, Covent Garden under the baton of Sir Antonio Pappano, Baron Douphol in Sir David McVicar’s  production of La Traviata for Welsh National Opera and the role of Horemhab in Phelim McDermott’s Olivier Award winning production of Philip Glass’ Akhnaten with English National Opera conducted by Karen Kamensek. Later this season he returns to ENO to sing the role of the Photographer in the world premiere of Iain Bell’s Jack the Ripper, the Women of Whitechapel directed by Daniel Kramer, conducted by Martyn Brabbins and to Scottish Opera to sing Papageno in Sir Thomas Allen’s production of Die Zauberflöte under the baton of Tobias Ringeborg.

​James made his Royal Opera House, Covent Garden debut as Gregorio Romeo et Juliette conducted by Daniel Oren and his ENO début as J.Robert Oppenheimer in John Adams’ Doctor Atomic conducted by Lawrence Renes. Recent highlights include critically acclaimed debuts at the Buxton International Festival as Gusmano in the UK stage premiere by Elijah Moshinsky of Verdi’s Alzira conducted by Stephen Barlow, Opera Holland Park as Kyoto in an Olivia Fuchs’ award winning production of Mascagni’s Iris conducted by Stuart Stratford, Frank in John Copley’s Die Fledermaus with WNO, The Commercial Counsellor Intermezzo for Garsington Opera and as Dulcamara in a new production of L’Elisir d’Amore for Scottish Opera.

​Excelling in the field of contemporary music,  James made his début with the Salzburger Festspiele in Alban Bergʼs  Lulu under the baton of Marc Albrecht, with further notable engagements including the role of the Protector in George Benjamin’s Written on Skin and Pablo in the UK premiere of Adès’s Exterminating Angel – both at the Royal Opera House, La Mettrie in the world première of Keyner Nit by Steinauer in Luzern and Zürich, John Sorel in Menottiʼs Der Konsul for Zürich Opera and the title role in Schweitzerʼs Jakob von Gunten at the Theater Saint Gallen. Subsequent roles include First Officer in The Death of Klinghoffer for ENO, Chou An-lei in Nixon in China for Irish National Opera with the RTÉ National Symphony Orchestra at the Bord Gais Theatre Dublin, Punch Punch and Judy, Theseus Minotaur – both Birtwistle, Stern Anna Nicole by Mark Anthony Turnage,  Johannes Morgen und Abend by Georg Friedrich Haas and Dionysus and the title role Jakob Lenz – both by Rhim.

​Recent highlights on the concert platform include Carmina Burana at the Royal Albert Hall and Haydn’s Harmoniemesse at the Cadogan Hall – both with the Royal Philharmonic Orchestra, Messiah and Brahms Requiem with the CBSO at the Birmingham Symphony Hall, Beethoven’s 9th Symphony at St John’s Smith Square, the title role of Elijah, Fauré, Mozart and Verdi Requiem and Mozart by Candlelight with the London Mozart Players at the Barbican.

James also regularly appears as guest soloist in the Classical Spectacular gala concerts for Raymond Gubbay with the RPO at the Royal Albert Hall, the Last Night of the Christmas Proms and New Year’s Proms in the Bridgewater Hall, Liverpool Philharmonic Hall, Birmingham Symphony Hall with the Manchester Concert Orchestra, and at the Hogmanay New Year’s Eve Gala with the Royal Scottish National Orchestra at the Glasgow Royal Concert Hall. He has also sung with the BBC Scottish Symphony Orchestra under the baton of

Donald Runnicles and in the Last Night of the Easter Proms for Raymond Gubbay at the Royal Festival Hall with the Royal Philharmonic Orchestra.

​James has performed many of the major Gilbert and Sullivan baritone roles for both The D’Oyly Carte Opera Company and the International Gilbert and Sullivan Company most notably appearing as the Pirate King in The Pirates of Penzance in a run at the Savoy Theatre in London’s West End.

​Current recordings include the role of Arrostino in Cellier’s The Mountebanks with the BBC Concert Orchestra, Sir John Copeland in Rodgers and Hart’s Dearest Enemy (New World Records), and the Rabbit in the original cast recording of Will Todd’s Alice’s Adventures in Wonderland (Signum Records). He also makes an appearance as the Mandarin Turandot alongside Tom Cruise in Mission Impossible Rogue Nation.