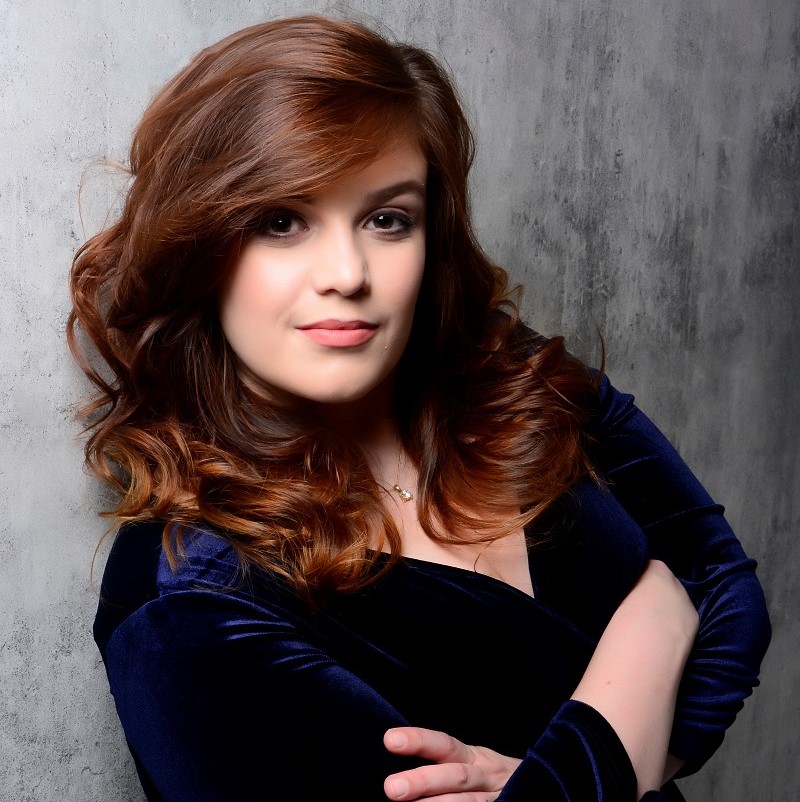 "An astonishing event based around Stockhausen's challenging work for just two singers… Such was the performer's consummate technical that we completely forgot that this is a technically demanding work. Both performers were fully inside the performance and created something that was truly astonishing.”

“In The Sky should come as a shock, and a delightful one… Chambers and Hardwick maintained a mesmerising pitch of intensity through the cycle’s 45 minutes as they sat before us and opposite each other … Hardwick’s wide-eyed joy and assured dramatic soprano the line took on celebratory overtones of rebirth and renewal.”

"It was a splendid showcase for the soprano soloist Rebecca Hardwick, who beautifully portrayed Mary’s humility and awe. Rebecca displayed her versatility with her clear and prayerful “Panis Angelicus”

Rebecca Hardwick is a versatile coloratura soprano based in London.

She read Music at the University of York before continuing her vocal studies at the Royal College of Music as an RCM scholar, supported by the Marjorie Tonks awardand a Pidem award. Roles at the RCM include The Governess The Turn of the Screw, Britten, Semele L’Egisto, Cavalli, and Madame Silberklang Die Shauspieldirektor, Mozart in scenes, as well as The Raver in a new opera in association with Tête a Tête On False Perspectives, Josephine Stephenson. Rebecca also completed the Opera Works course at English National Opera; roles in scenes included The Controller Flight, Dove, Fiordiligi Cosi fan tutti, Mozart and Ilia Idomeneo, Mozart.

When Rebecca first moved to London, she sang with the chorus of Opera Holland Park for a number of years, as well as appearing in a number of small roles including Una Conversa Suor Angelica, Puccini, Soprano Victorian Alice’s Adventures in Wonderland, Will Todd, which transferred to the Linbury theatre, Royal Opera House. Operatic roles include Zerbinetta Ariadne auf Naxos, Strauss at Berlin Opera Academy, and Dot/Day with Hampstead Garden Opera The Enchanted Pig, Dove at Jackson’s Lane Theatre. She has also appeared at the Aix-en-Provence Festival, Bergen National Opera and Longborough Opera Festival.  Rebecca makes her Royal Opera House debut as 1st Bridesmaid in Le Nozze di Figaro with Sir John Eliot Gardiner in 2019.

Rebecca was an apprentice with the Monteverdi Choir, during which she received coaching and training in a wide variety of repertoire, both in an ensemble and as a soloist. She performed Purcell’s Mad Bess with the English Baroque soloists in Temple church. She has subsequently toured a number of works with the choir, most recently Verdi Requiem. Rebecca was nominated in January for the Joaninha Award by Sir John Eliot Gardiner in 2016.

An advocate for contemporary repertoire, Rebecca received coachings on Am Himmel Wandre Ich at the Stockhausen Stiftung für Musik in Kürten, Germany, leading to a tour of the piece over the UK. She is undertaking a residency at Aldeburgh to study Kurtág’s Kafka Fragments for soprano and violin with Mayah Kadish. She commissioned a number of new works for a solo recital with Borough New Music Festival.

Rebecca sings with the choir of St James’s, Spanish Place in Marylebone.

For Oratorio, Concert and Opera repertoire please scroll down